I’ll let the picture do the talking. I’m using ObjectDock(not really useful, and worth it only for the eye candy), Launchy(which helps me eliminate pretty much all icons from my desktop), this tiny thing called DColor XP that lets me put the small tiled icons instead of regular sized monstrosities,and Samurize, with a mostly custom configuration, particularly the middle bit. It has disk space monitors on both drives, and CPU and RAM usage monitors(shaded is used, purple’s free), as well as a Winamp display: just song,album,artist and elapsed time. The clock I obviously copied from the Samurize site…thank you, guy-who’s-name-I-forgot. Below that is my to-do list; I’m actually keeping one now, as part of my “get your life into shape” plan. Not really working out that well so far: mostly, I think, because these are all very general, non-time limited goals. Well, I’ll fix that soon enough. 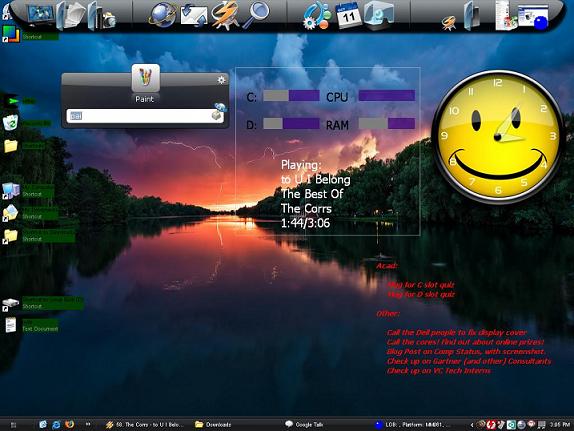 I was inspired by this guy, although I couldn’t go as far as he did. Specifically, no Yod’m 3d, Taskbar Shuffle, Start Killer or AutoHotKey. Or even the Google Desktop Sidebar thing, because I don’t have enough RAM to spare to run it and Launchy concurrently. Thanks, dude!

Meanwhile, not a single major game I’ve installed so far(Overlord, Heroes of Might and Magic V, and Deus Ex 2: Invisible War) has worked. I’m thinking it’s a systemic problem. They’re not even loading, it’s just returning a generic “unable to open this file” error. Any advice?

The Overflow (my tumblr)